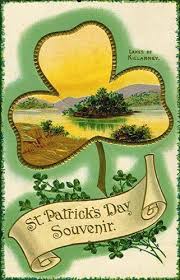 St. Patrick is the patron saint of Ireland and the Irish. He was born about 389 A.D. in Northern Wales, which at that time may have been part of England or Scotland.
Saint Patrick had an adventurous life. He was captured by pirates at the age of 16. The Irish pirates brought him to Ireland to tend the flocks of a chieftain in Ulster. Six years of slavery made him a devoted Christian. He escaped to France and became a monk. In 432, a vision led him to return to Ireland as a missionary bishop. He brought Christianity to Ireland and taught there for 29 years. He used the shamrock, a 3 leaf clover, (Ireland's national flower) to explain the Blessed Trinity. St. Patrick founded 365 churches, baptized over 120,000 people and consecrated 450 bishops.
Many tales sprung up about this popular saint. One of the most popular legends was how he charmed all the snakes of Ireland down to the seashore to be drowned by the water. The only certain writings of St. Patrick's are his Confessions and a letter written to a man named Coroticus (See Tripartite Life of St. Patrick by Stokes and Lives by Todd, Healy, Bury and Lusack.). His Confessions are written in crude Latin.

According to some Irish writings, St. Patrick died on March 17, 461 A.D. The anniversary of his death is celebrated as St. Patrick's Day. It's interesting to note that the shamrock clover flowers around that time of year.
The first official celebration of St. Patrick's Day in the United States occurred in Morristown, New Jersey in 1780. It was authorized by George Washington. Today St. Patrick's Day is celebrated by the Irish as well as many Americans with parades, parties, wearing of green, Irish songs and jigs. People wear green on this day to represent the lushness of Ireland - The Emerald Isle.