Fact 1️⃣
"A quick brown fox jumps over the lazy dog".
This sentence is often used to test typewriters and keyboards.

Fact 3️⃣
The # symbol has several names.
The official name for the # symbol is octothorpe. Octothorpe is a made-up word invented in the 1960s when the # symbol was added to telephone keypads. The octothorpe now has several names and uses in English.
* hashtag
This is a more recent use of the # sign. On Twitter and other forms of social media, the # symbol is used before a word or phrase to identify messages on a specific topic. #EnglishIsAwesome  #ReallyLearnEnglish  #FunFacts
* pound sign
The # symbol comes from the abbreviation for pound in weight: lb. When writing lb, it was common for scribes to cross the letter across the top like the letter t. Eventually, the # symbol was invented from this writing.
* number sign
The phrase number sign was used in British English because pound sign could easily be confused with British currency (pound). The # symbol can be used to identify numbers, such as number 2 (#2).

Fact 4️⃣
The longest word in English has 45 letters:
‘pneumonoultramicroscopicsilicovolcanoconiosis’! It is a type of lung disease caused by inhaling ash and sand dust.

Fact 5️⃣
There is Only One Word in English With 5 Vowel in a Row
Did you guess what it was? The answer is “queuing”!

Fact 7️⃣
Shakespeare invented over 1,700 common English words!
He invented new English words, but he also changed how some words were used. He changed nouns into verbs, verbs into adjectives, connected new words together and added prefixes and suffixes to old words.

Fact 8️⃣
A "pangram" is a sentence that uses all 26 letters of the English alphabet.

Fact 9️⃣
The most difficult tongue twister in the English language is “Sixth sick sheik’s sixth sheep’s sick”.
Why not try it out on your friends and see if any of them can say it without making a mistake?

Fact 🔟
English is the language of the skies.
It doesn’t matter which country they are from, all pilots speak in English on international flights.
In 1951, the International Civil Aviation Organization (ICAO) recommended that English be the standard language for air travel communication. 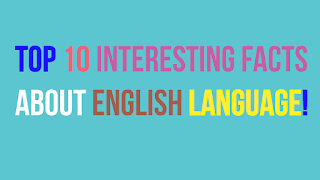