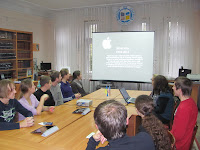 In Window on America center on October 20th there was a meeting of English-speaking club on the topic “Steve Jobs & Apple products”. The club was led by a PC volunteer Amanda Norton. She prepared a presentation about some facts from Steve Job’s lifetime and a text about Apple products.
There were 19 participants, among them 2 PC volunteers, 2 pupils (11th formers), 2 specialists, 1 librarian, 12 students. They listened to Amanda’s presentation and then read a text in groups. Afterwards the participants presented the information about the six Apple products themselves. While preparing they actively used both iPads to search information.
The topic of discussion was actual enough and people got to know about such a prominent personality of 21st century as Steve Jobs. They also had the opportunity not only to get information about Apple products but also to use one of them, the iPad.