Time to talk about Christmas celebration 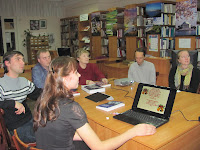 On December 15th there was the meeting of the English-speaking club. The topic of conversation was the coming holiday “Christmas”. There were 6 participants, among them 2 specialists, 2 students, 1 pensioner, 1 PC volunteer.
The leader of the club, a student-volunteer Yuliya Kulchytska, prepared a presentation about Christmas celebration, traditions in different countries, symbols and colors of the holiday. She also prepared several songs to sing, such as “Jingle Bells” and other carols. 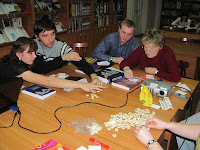 Peace Corps volunteer, Sharece Bunn, also took an active part in the meeting of the club and prepared some games to play. She used the anagram game “Bananagrams” and it was a success. Each of participants at first tried to match letters in words out of six, seven, and eight tiles. Afterwards they started a group game by arranging the word “Christmas” and connecting or intersecting words in horizontal or vertical position. Thanks to such games the meetings of the English-speaking club are more exciting and involve each participant to develop language skills. 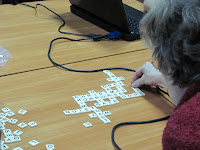 The informational center “Window on America” expresses gratitude to the Embassy of the United States of America, Public Affairs Section, for donating games, audio-books, DVDs, IIP publications and literature. These resources will enrich library funds and widen the possibilities of getting new and up-to-date information for the readers and visitors of the center.