– листопада 11, 2011
The first decade of November in the WOA center was marked by some exciting English-speaking activities. Four club meetings took place in ten days. The total amount of participants is about 60 persons. They were willing to communicate in English and they really had a great time, I must admit. I’d like to remember those meetings and all the staff. 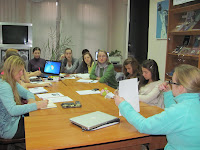 On the 2nd of November TOEFL Test Takers Club (TTT Club further) took place. There were 11 participants, including a PC volunteer Sharece Bunn. Girls (all of the participants were girls) tried their best in writing section of the model test. The theme of an independent essay was “An Important Leader”. The students wrote their essays and discussed them after some instructions from Sharece concerning such important parts of an essay as introduction, thesis statement, body and conclusion.

The next day, November, 3, the English-speaking club took place. The topic of conversation was “Social Media”. The leaders of the club were two 11th form pupils of school #3 Yana Kumpanenko and Olena Klymenko. They gathered the auditorium of 25 participants who exchanged their opinions on several popular social networks, such as Facebook, Vkontakte and Odnoklassniki. The representatives of several countries, the USA, Canada, Nigeria and Ukraine, talked about popular social networks in their countries. 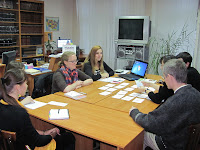 For the following TTT Club which was on the 9th of November PC volunteer Sharece Bunn prepared a warming-up game based on the essential words for the TOEFL taken from the book with the same name. After the game the participants practiced in listening section of the test and showed pretty good results. They also talked to the girl who passed the TOEFL test several years ago which was not Internet based, therefore they mutually exchanged experience and ended the meeting with a relaxation of playing a guessing famous person game. 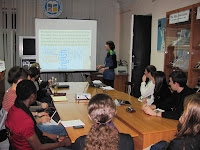 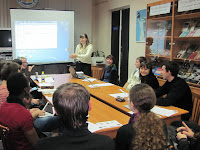 Yesterday’s meeting of English-speaking club on November, 10, was a real success thanks to the two 4th course students of Ternopil national pedagogical university Yuliya Kulchytska and Valentyna Rudak. They prepared a presentation in the form of an interactive trip to the Ireland. The 14 participants of the club got to know some interesting facts about Ireland, its symbols and its two major cities Belfast and Dublin. The virtual excursion around Ireland castles was accompanied by an Irish melody. The visit to the Irish Pub was accompanied by singing the Irish Pub song (everyone had the text printed). One more song, "You Raise Me Up" by Josh Groban, was sung in the form of Karaoke. The meeting ended with some interactive activities and everyone wrote his wishes and expectations anonymously on the pieces of paper. These pieces of information give us, the leaders and organizers of the club, the inspiration to go on. So thank you for participation and welcome to the TOEFL Test Takers club and English-speaking club!!!