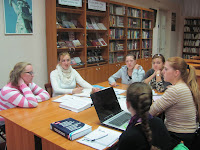 On October 26th there was a meeting of TOEFL Test Takers Club. The club was led by a student of Ternopil national economic university Diana Goliash together with a Peace Corps volunteer Sharece Michelle Bunn.
There were 6 participants, among them 5 students and 1 PC volunteer. They trained in listening and speaking sections of TOEFL iBT test. They used a book with tests and audio-CDs. The topics of speaking were: “A Marriage Partner” and “News”.
The main problem in speaking was the limit of time. Students were supposed to speak for 45 seconds and the preparation time was 15 seconds. So the native speaker, Sharece Bunn, tried to explain how to manage to cope with such a task. After some training the participants had a success in speaking.