Some kinds of meetings within the English-speaking club 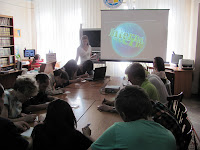 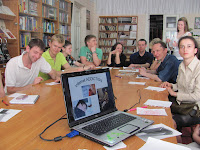 Spring meetings of the English-speaking club come to the end. Summer vocations are ahead and the speakers of the club are going to have a rest. Travelling and camping are of a great interest among the participants of the club. 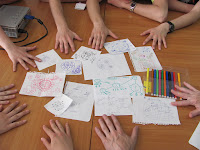 Recently club members has talked about internet and tested themselves on how much they are keen on websites and social networks. The internet addiction appeared to be a question to consider. Very interesting internet schemes were sketched, especially the one created by a professional programmer, a member of the club. 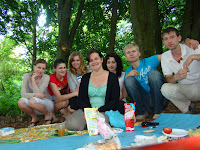 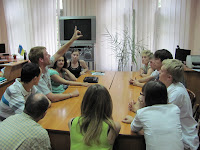 One more American guest came to the previous meeting of the English-speaking club. Amanda’s friend Ryan Murfield accompanied her to lead the club. Ukrainian members of the club questioned Ryan a lot and were thankful for the experience of communicating with a native speaker. Ryan is a Peace Corps volunteer in Monastyrysk, Ternopil region, and was invited by Amanda to participate in her summer camp which she holds in Ternopil Ukrainian Gymnasium named after Ivan Franko. 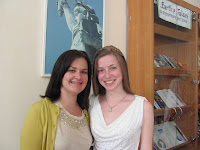 Next meeting will be the last one in this academic year and will be dedicated to sports. The farewell party will take place for the speaker of the club Iryna Kushnir as the next academic year for her will be in Budapest, Hungary, at Central European University. Congratulations!!! Don’t miss the party!