March 29 – Meeting with the participants of the Fulbright Program 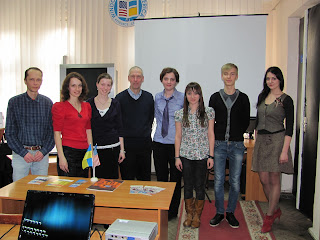 On March 29 there was a meeting with two scholars, Ukrainian and American, who are the part of Fulbright Academic Exchange Program. The audience consisted of students and specialists (12). The guest from America, Stephen North, presented his experience of life and work in Ukraine. He said that after his descriptions of our country, his colleges in U.S. begin to name Ukraine without particle “the”, because Americans named our country “the Ukraine”, meaning a part of another country. Another guest from Ukraine, Maya Repchenko, said that being a Fulbrighter for her is a great honour, and she gained that possibility by hard work and persistence. Those participants who were interested in this program had the possibility to ask questions and received informative and vivid answers.